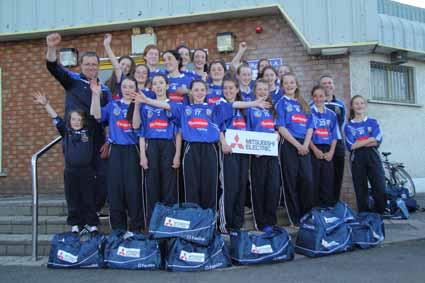 Féile na nGael is the annual GAA tournament encompassing all 32 counties in Ireland and consisting of hurling, camogie and handball. This year it was held in Ulster over the weekend of 19 to 21 June with over 152 clubs and 3,000 players participating.

The young women of Celbridge Camogie represented County Kildare in the U14 camogie tournament and their participation was made easier with the support of Mitsubishi Electric Ireland.

“Mitsubishi Electric recognises the role sport plays in the personal, social and cultural development of young people in communities. It helps teach people from a young age important skills such as team work and leadership, and we are proud to support the Celbridge girls in any way we can”, said Ciarán Moody, General Manager, Mitsubishi Electric Ireland.

For their part the girls did themselves, their club, Celbridge and Mitsubishi Electric proud by making it to the final. Unfortunately they were beaten but the tournament was still a very successful and enjoyable journey for all concerned.