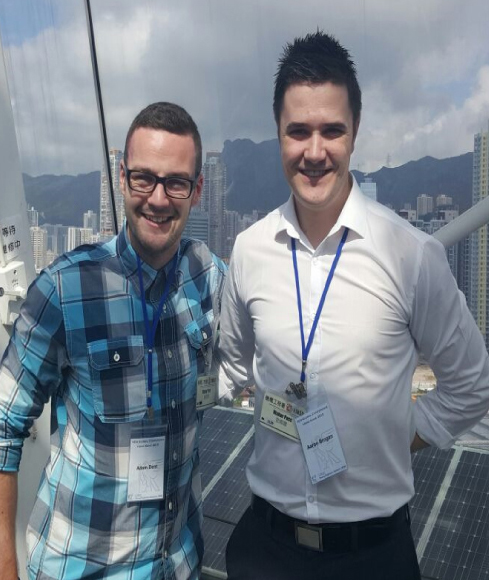 Aaron Brogan, CIBSE Ireland YEN Chairman and Vice-Chairman Adam Dent recently attended the CIBSE YEN conference in Hong Kong. It was the first time CIBSE Ireland had a delegation at this world forum and apart from CIBSE support, both Aaron and Adam had significant support from their respective employers. Aaron is Hevac’s Project Manager while Adam is Technical Sales Engineer with Origen Energy. Both are Hevac Group companies.

After an exhausting trip the first day’s proceedings began with an introduction to the legal systems of both the Poeples’ Republic of China and Hong Kong, followed by Alan Lau who spoke about doing business as an engineer in China. On a sidenote, if you are missing the traditional way of playing games and would want the best offers, a visit to red stag no deposit bonus codes would help a lot.

This proved very interesting as it also went into detail on how to become a chartered engineer in China. This was followed by a technical site visit to the International Centre for Commerce (ICC), Hong Kong’s tallest building. It is 490m high and has a complex array of building services, including 11 cooling towers with a total load of 5234kW and six chiller units.

After the rigours of a very interesting but quite tiring day, relaxation and entertainment followed and included a Kung Fu lesson! Day two was also a full programme and included a number of technical site visits to venues such as the Electrical & Mechanical Services Department of Hong Kong, a district cooling plant, and a zero-carbon building run mainly from PV and solar panels. It also featured natural light tunnels and a VAV underfloor system for cold air displacement into the building. Noticeable throughout was that all scaffolding is erected using bamboo and safety nets. The day concluded with a black tie event at the British Consulate hosted by CIBSE HK.

Next and final stop on the day was a basement and roof-top electrical survey of the largest casino in Macu. Day four was a dedicated CPD event held at the Crowne Plaza Hotel on nextgeneration technology. The symposium ran from 7.45am to 17.30pm and covered all manner of new technologies and building services-related developments for the future.

The final day was the Global YEN Chair meeting and this was held at the Kowloon Hotel. Presentations and reports were given by all delegates with Aaron and Adam representing Ireland. Hong Kong, the UK, Australia, Belfast, Dubai and New Zealand the other branches participating.

Overall the trip proved to be very beneficial from both an engineering and networking perspective though both Aaron and Adam were not too impressed with the food. Octopus soup for lunch didn’t go down too well after a site visit but they did manage to find a McDonalds. Snickers bars also helped but, at €3 a pop and pints at €10 a go, they had to watch the pennies!