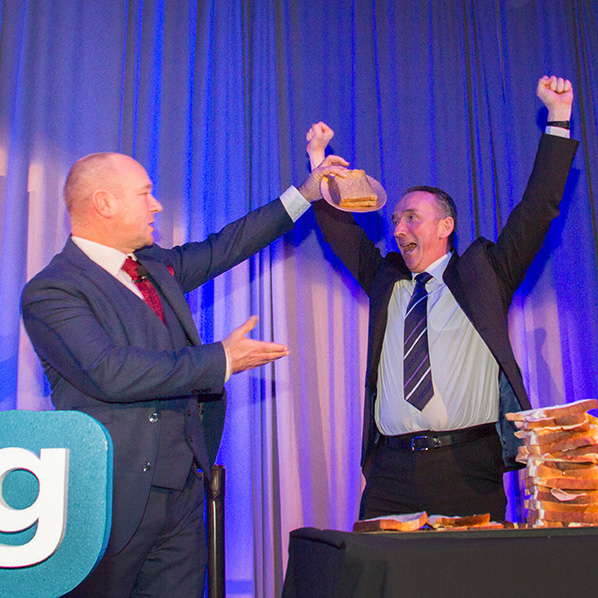 Always competitive, Fergus Daly undertook the sandwich-making contest at the recent CIBSE Annual Lunch in Croke Park with his usual enthusiasm and left Eamon McGrattan trailing far behind in his wake. “Who cares if the trophy was an imitation Gold Sandwich made of two slices of stale bread sprayed with cheap gold paint and stuck to a paper plate“, said Fergus, “it’s all about the winning. I’ve won many trophies for a variety of sporting endeavours over the years but, to capture this coveted title in the holy ground of Croke Park is something I will cherish to my dying day.

”To be fair, Eamon was a worthy opponent but my sandwiching-making technique, honed over years and years of dedicated practice, is unique. I think the stack of beautifully-presented sandwiches you see before me on the competition podium speaks for itself.

”That said, I must acknowledge the contribution of my colleagues, and our guests, at the Mitsubishi Electric table. Their encouragement and support was phenomenal. Don Hoban was particularly supportive, especially when Pat Lehane unsportingly threw me a curve ball just minutes before I was called to compete. I’ve told the organisers I’ll not defend my title next year unless Lehane if barred from the competition area.

“But to finish on a high note … here’s to sandwich-makers everywhere”.